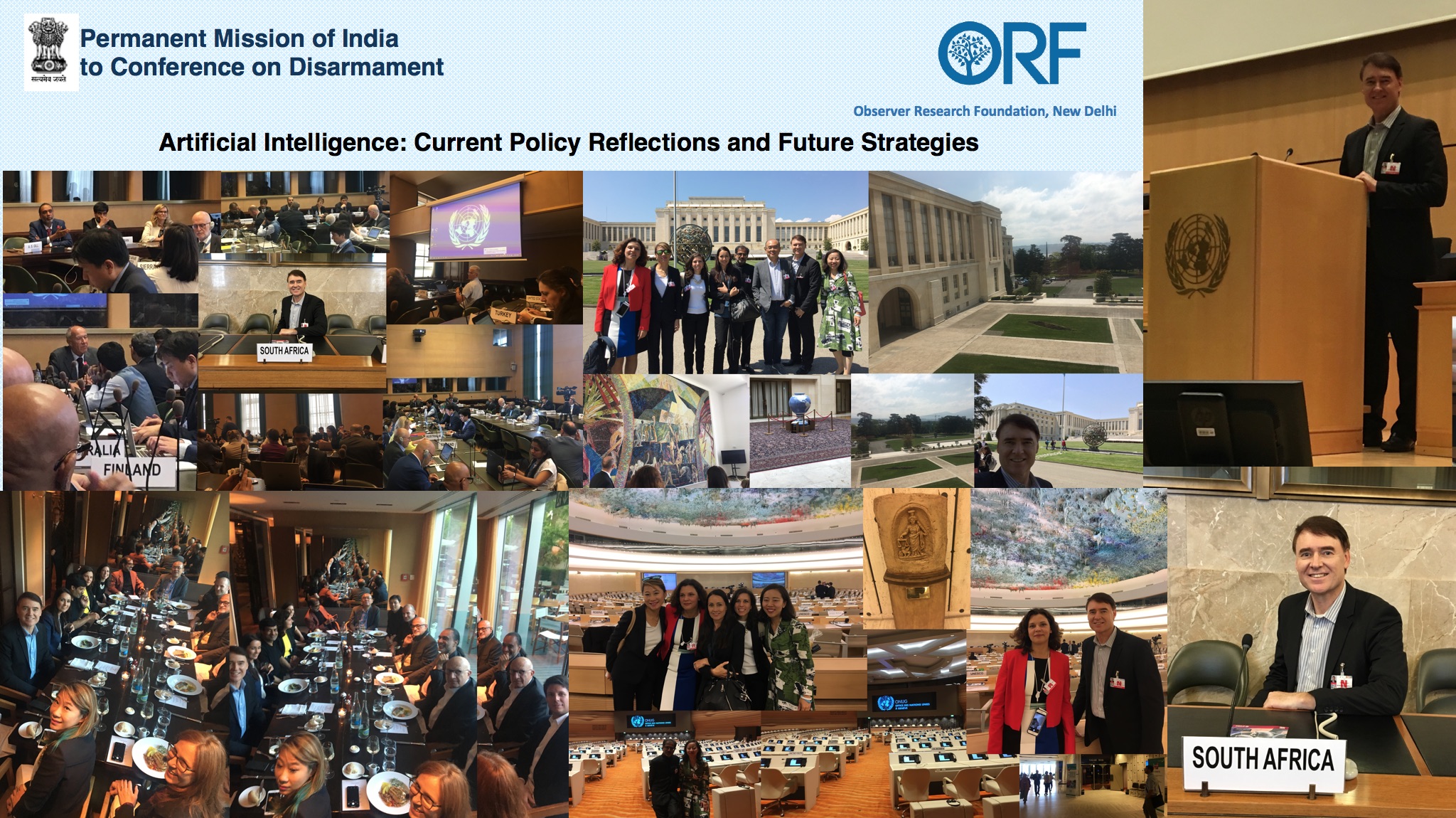 Following the exciting AI for Good Global Summit, I was involved in another very stimulating and thought provoking conference at the United Nations in Geneva, Switzerland with delegates, diplomats, representatives from across the globe in the audience. The event, AI: Current Policy Reflections and Future Strategies, was held at the Palais de Nations, United Nations on 18 May 2018. As first time visitor to the United Nations it was not only a privilege to be there, but also to partake in the discussion on “Adopting AI in Industries: Potential and Challenges” as invited AI expert and African representative. As mentioned here as well as this post, this was also an opportunity to represent the Machine Intelligence Institute of Africa (MIIA) and Cortex Logic (as one of the sponsors).

Applications of Artificial Intelligence and the use of Autonomous Technologies (AT) are growing. The social, political and economic impact of these technologies is significant. Discussions on ethical aspects, possible standards and norms have already started in several jurisdictions including Canada, China, Germany, EU, India, Japan, Norway, Republic of Korea, the UK and the U.S. From a multilateral perspective there would be value in an exchange of nascent national experiences on AI/AT policy and standards. Such an exchange, particularly in a Track 1.5 setting, could generate insights for discussions on rules and standards related to AI/AT in inter-governmental forums. Such an exchange of information could also be an important component of future confidence building measures in platforms such as the Convention on Certain Conventional Weapons (CCW).

Transforming Governance through Emerging Technologies – lessons from Asia and Africa

From the emergence of digital identity programs in South Asia to the use of mobile money in Africa, policymakers across jurisdictions are exploring how technology can be adopted in various sectors while addressing the challenge of inclusion, building capacity, providing economic incentives and creating jobs. Asgovernments in emerging countries try to ease AI and autonomous technologies (AT) into their societies, the march of technology appears to be headed on a collision course with centuries-old structures of industry and economics.

The panel consisting of experts from Asia and Africa will take stock of developments in AI policy and e-governance initiatives undertaken by their respective governments; and specifically identify policy priorities and capacity gaps for emerging economies.

Building Normative Frameworks for AI and Governance: Lessons from the US and EU

The West has traditionally been considered the progenitor of new technologies and the rules that govern them – they continue to do so with the emergence of artificial intelligence.Policymakers from Transatlantic states have taken the lead in incubating talent in the sector, incentivizing startups through their regulatory frameworks and finally, in discussing norms to regulate the use of such technologies. This panel will discuss the commonalities in their strategic vision that gives these states an edge in building and scaling these technologies. Is there a normative framework that can drive this growth in other parts of the world?

With AI estimated to add to add USD 15.7 trillion to the global GDP by 2030, the opportunities for both incumbents and startups is huge. At the same time, companies will need to focus on skilling the workforce and identifying points in the supply chain for integration of AI. This, however, will require greater consideration on the design, purpose and deployment of AI. This panel will discuss how early adopters of AI are using the technology in different forms in their businesses. How is this AI transforming products, processes and outcomes for companies in industries such as FinTech and healthcare?

Sustaining International Learnings on AI through Exchange of National Experiences

As governments the world over look to digitise their operations and harness the potential of machine learning, how can national experiences from varied contexts be exchanged to move the discourse forward? The social and economic impact of AI cannot be mitigated by merely overseeing the design of technology. The technology has to be introduced in different societies by training the workforce to protect users and data. How can states in different stages of AI development build capacity, train workforce, ensure safety and create public awareness around the new technology? What regulatory frameworks can states adopt to promote the development and use of AI in their respective economies?

This panel will discuss how the policy community can focus their efforts both domestically and internationally to build a normative consensus to adopt AI in their regimes. The panel will also explore the role of the industry and identify short term and long term goals for the broader community.